It’s a beautiful, cool evening as leaves fall all around.  Summer decor has given way to cornstalks, pumpkins and mums, but now mixed with spiders, witches and bats.   Ghosts ooze from behind faux gravestones as an eerie soundtrack fills the air.   Jack-o-lanterns light the path for trick or treaters to gather as many treats as time allows. Giggles float on the chilly breeze…..

Halloween is one of the most celebrated holidays here in the U.S.  We love dressing as someone or something else for the evening and gathering to tell ghost stories and make merry with our family, neighbors, and friends.  It is a tradition that we remember fondly from our childhood and enjoy passing on to our kids.  But, where did it begin?  Why do we deck our homes with spooky things and love to scare and to be scared?

Halloween’s roots can be found in the festival of Samhain, a Gaelic word meaning ‘Summer’s End’.  According to Wikipedia, Samhain is a Gaelic festival marking the end of the harvest season and the beginning of winter or the “darker half” of the year. Traditionally, it is celebrated from 31 October to 1 November, as the  Celtic day began and ended at sunset. This is about halfway between the autumn equinox and the winter solstice.  It was a time for celebrating the harvest, but also held great superstitions and fear. 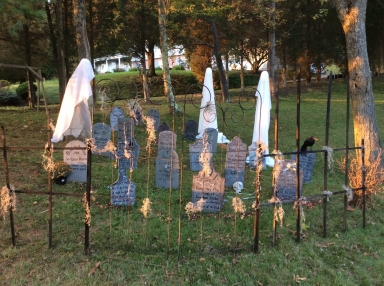 Samhain tradition had many deep seeded supernatural practices that were an integral part of the annual festivities. The somewhat fearful people that lived during these ancient days fervently believed that the end of the harvest and the onset of winter also created an unusual opportunity for the spirits of the newly deceased. During the short window of time surrounding Samhain, it was commonly believed that the souls of the dead could return to life and mingle amongst the living.

Safeguards were taken against bad fortune brought by the spirits.  Lanterns of turnips with frightful faces were carved to light the path.   Masks and animal skins were worn as not to be recognized by their recently deceased relatives.  They left lavish feasts out to appease any malevolent, hungry spirits.

These Samhain practices evolved, tempered by religion, and were introduced to America after the Great Potato famine.  Irish immigrants continued to practice fall harvest celebrations in their new country.  By the turn of the twentieth century, everyone had

joined the party.  Adults celebrated the holiday of Halloween with great gusto.  Fortune telling, telling of ghost stories and pranks were the activities enjoyed by costumed guests.  Decorations were scarier and more macabre.  The Beistle Company and Dennison Manufacturing Company created cardboard and paper products of ready made party items.  Both companies are still in business today.

After WWII, Halloween became a holiday for children with decorations and costumes reflecting the lighter side of ‘spooky’.  Today, Halloween is the second most celebrated holiday in the U.S.  Last year (2017), 179 million Americans celebrated the holiday and spent 9.1 billion (yes, billion!) dollars!

According to the National Retail Federation (NRF) survey, 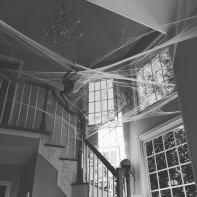 So this October as you dig the Halloween decorations from the attic or closet, think of those ancient Celtic villagers who started it all.   And remember, the crack between the worlds may still be open.  Carve that Jack-o-lantern and pick a good costume.  You never know who else may be hanging around October 31st.

Check out my black Feather Trees at www.etsy.com/shop/thefaerywoodtree 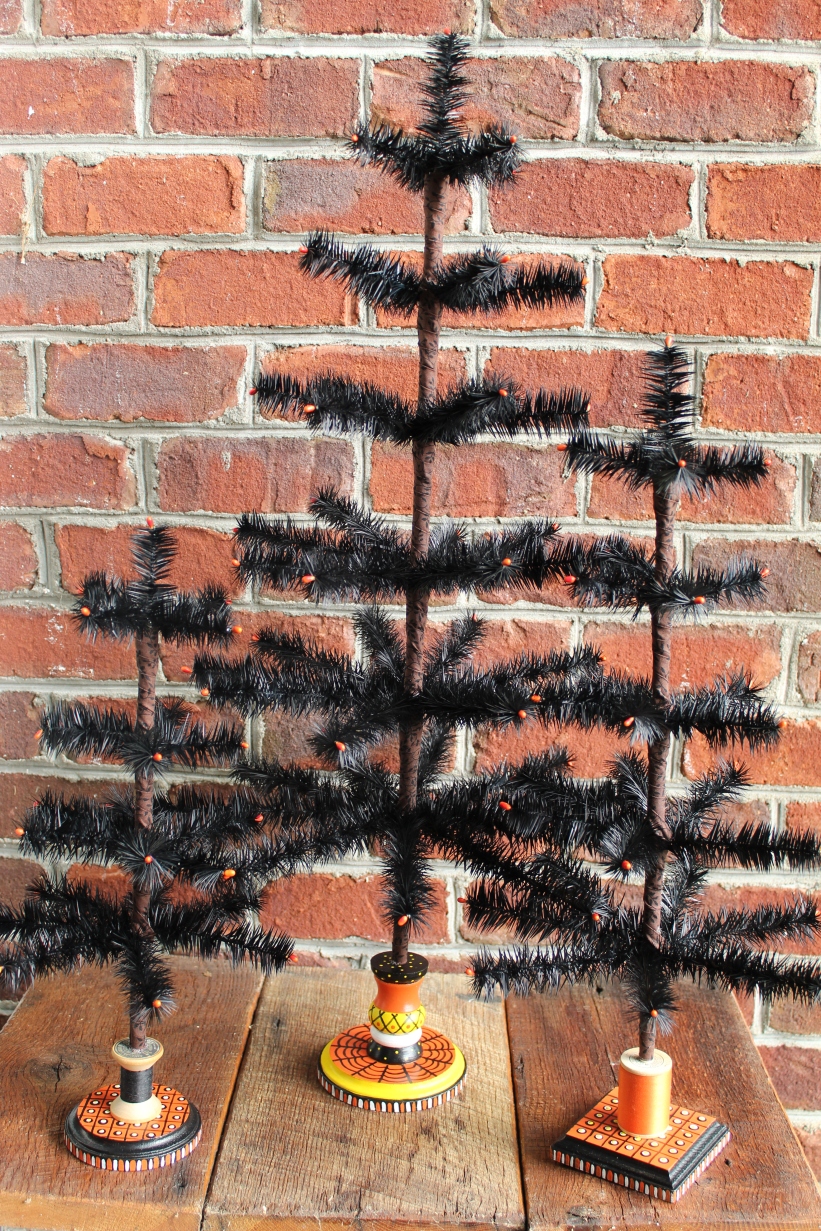 Welcome to The Faerywood Tree! Growing up a kid of the sixties in a small town in West Virginia filled me with adventure and wonder. My patch of woods drew me in; nurtured my imagination and curiosity. The dolls I create are inspired by those days; the past times of summer, the beings that I was sure lived in my woods, the story books that I read and reread. My wish is to pass on the joy of childhood; that each doll give a smile and hours of play. I have been designing original cloth dolls for nearly twenty five years. I have had dolls juried into arts and crafts shows, galleries and Tamarack of West Virginia. My love of vintage has also urged me to learn the age old techniques of German Feather tree making. They were the first artificial Christmas trees and brought to America by German immigrants longing for a little of Christmas from their country. It is amazing how twirling dyed goose feathers around wire looks like pine needles. Many of the spun cotton and paper ornaments sold in 'dime' stores were made to hang on the feather trees. I use the original techniques to recreate the trees. View all posts by Lee Anne